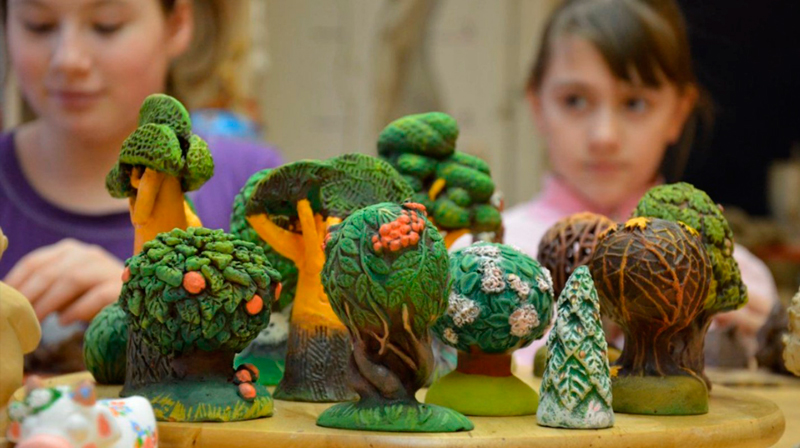 There is a town in Russia called Dzerzhinsk. Until 1929, the town was previously a province known as Rastyapino. A studio called “Young Sculptor” is located in Dzerzhinsk nowadays. At this studio, children under the guidance of mentor and artistic director Vladimir Kornev create small ceramic sculptures known as “Rastyapinskie zabavy” (literally meaning “Rastyapinskie toys”) from the word Rastyapino. These toys humorously depict the inhabitants of the city, historical characters, architecture and artifacts from the late 19th to early 20th century and simply funny animals.

The young group of apprentices

Rastyapinskie toys represent the history of the province in a cartoon that always elicits a smile in the audience. The toys are very popular among locals and tourists. Some figurines can even be found in the yards and in the streets of the city – Vladimir discloses. 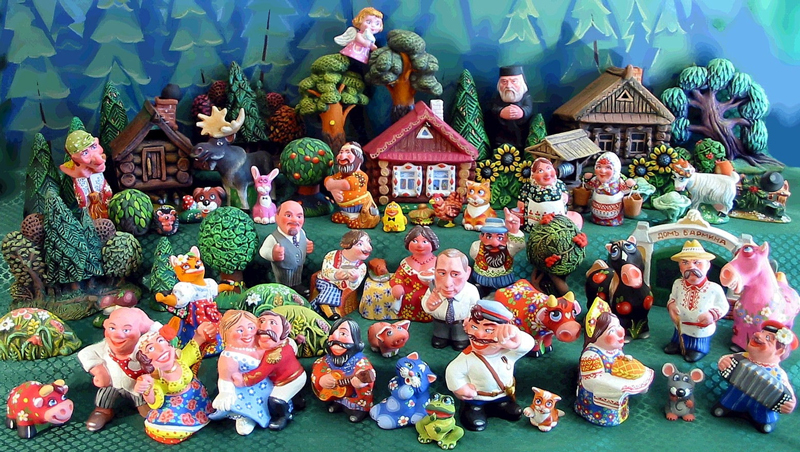 3D scanner from RangeVision Smart recently appeared in the studio. Also, the studio got a 3D printer. Along with this, children have the opportunity not only to learn the clay modeling, but also to learn the intricacies of the bases of production and modern technology. Moreover, production process has become simpler and faster. Let’s tell you a little about how it had done before and how it is done now so that the practical benefits of 3D technologies could become obvious.

Previously, in order to make beautiful clay toys, we had to sculpt it out of clay. Next, this clay model was shot plaster form, which is filled with liquid clay (slip) then. In the end appeared a clay toy which was ready for further painting. There was always the problem of preserving the plasticine model so that we can make further plaster molds. It would give us the opportunity to create the whole series of toys. 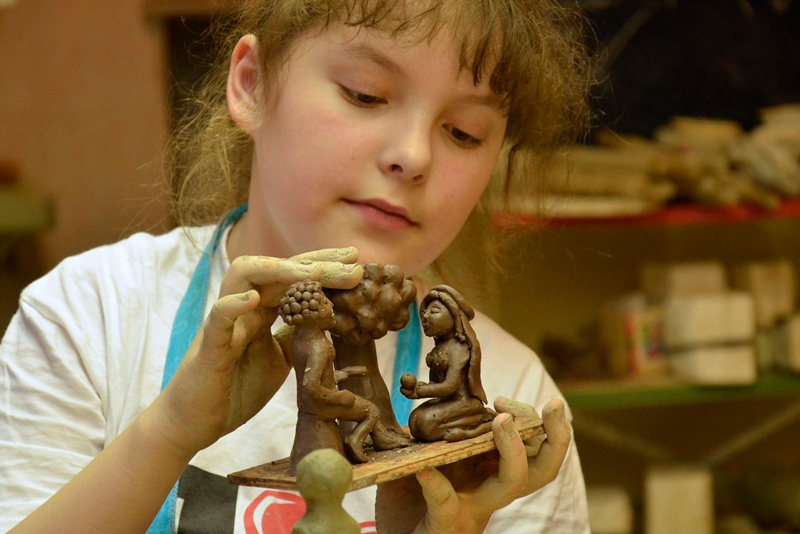 Modeling of figurines from clay

The solution to this problem was to use plastic model printed in a 3D printer. Now you just only need to scan the clay figurine to get its 3D STL model on the computer, and then print on a 3D printer. “RangeVision offered us the affordable scanner solution with high detalization. This 3D scanner can capture finest details of a figurine. This RangeVision scanner was an ideal choice for our goals,” - head of the studio shares his impressions.

Next, we’ll describe the process of creating souvenirs with the help of the RangeVision Smart 3D scanner. 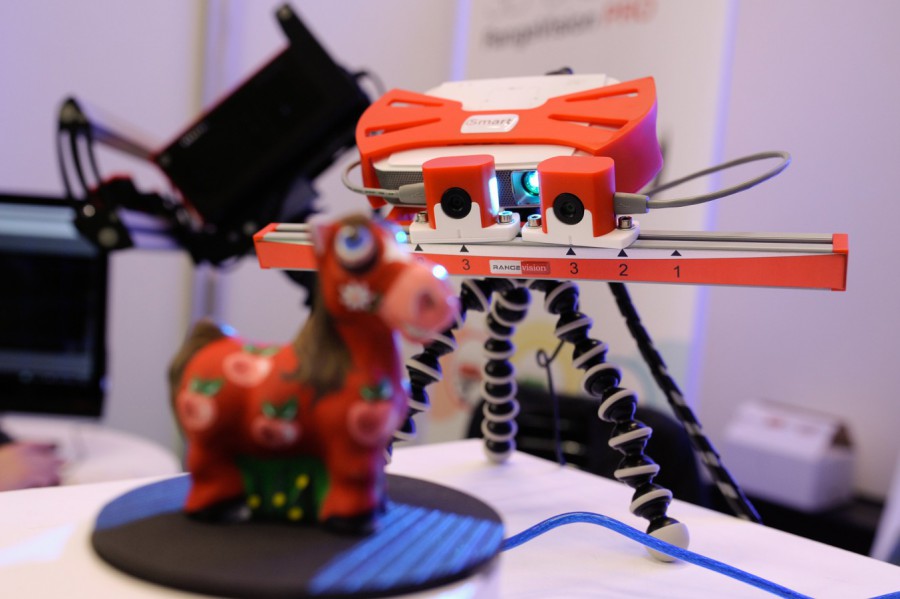 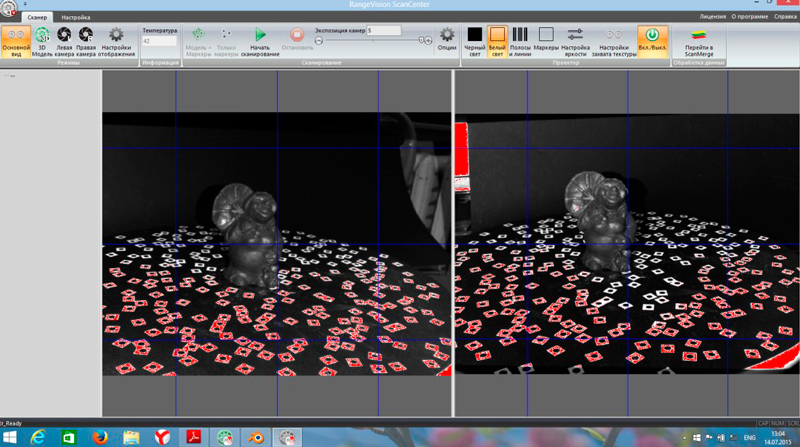 2. An accurate 3D model of the figurine appears on the computer. It can be edited in 3D modeling program Blender. This program is popular among 3D and virtual sculptors around the world. “The apprentices also know how to do it. Blender is an extremely accurate and easy-to-use tool that is more advanced than the usual centuries-old sculptor’s tool – stack. But this software is useless for our goals without the RangeVision Smart 3D scanner, – says Vladimir. 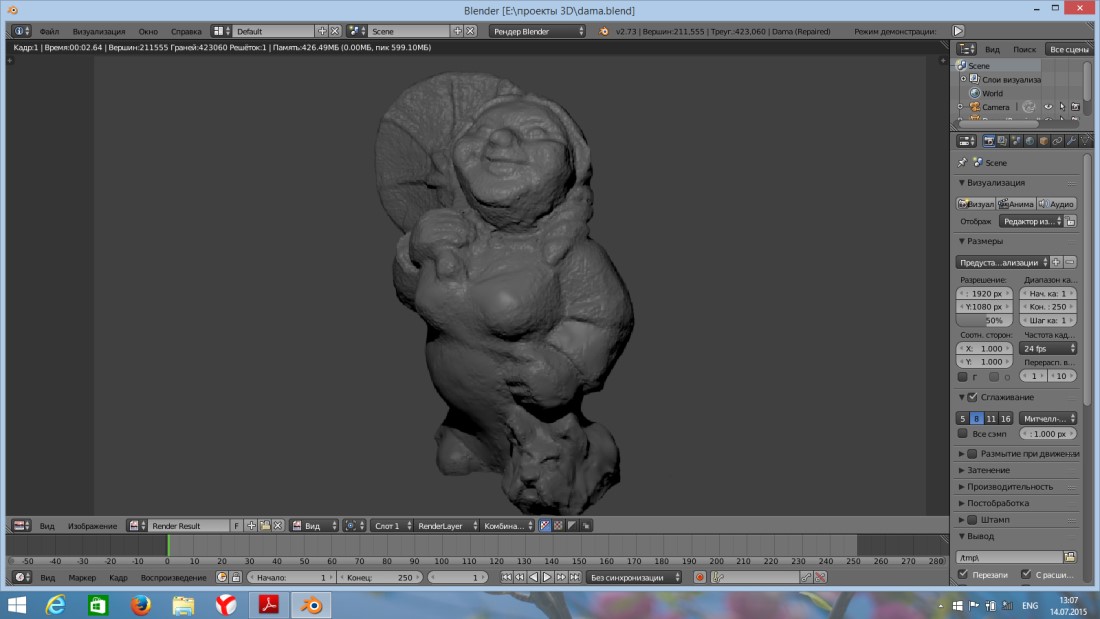 3. Once the 3D model acquires its final form after editing, it is sent to the 3D printer to be printed. 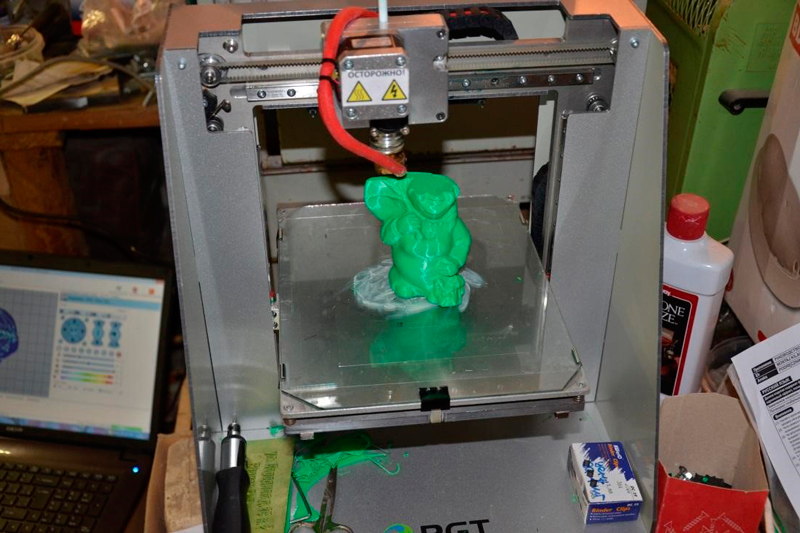 Printing of 3D model of the figurine

4. The next step is to make a plaster mold. The printed figurine is immersed into a special mixture (it can be purchased at any hardware store), which hardens after 10 minutes. 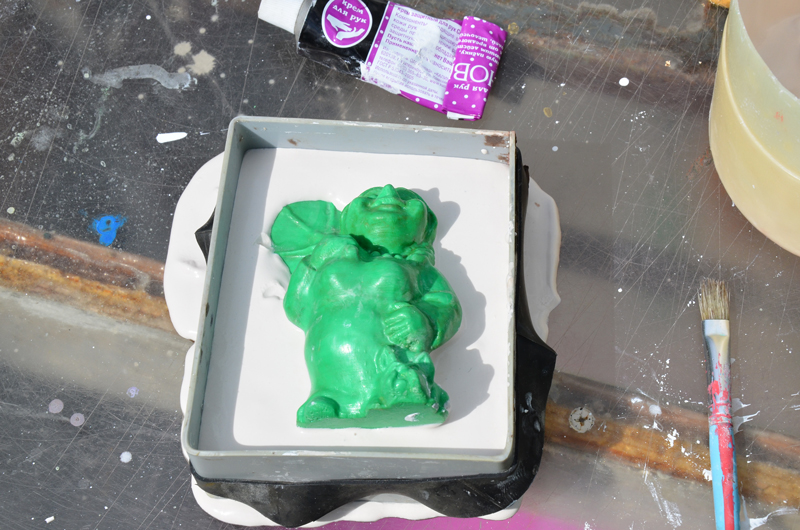 Immersion of printed figurine into plaster 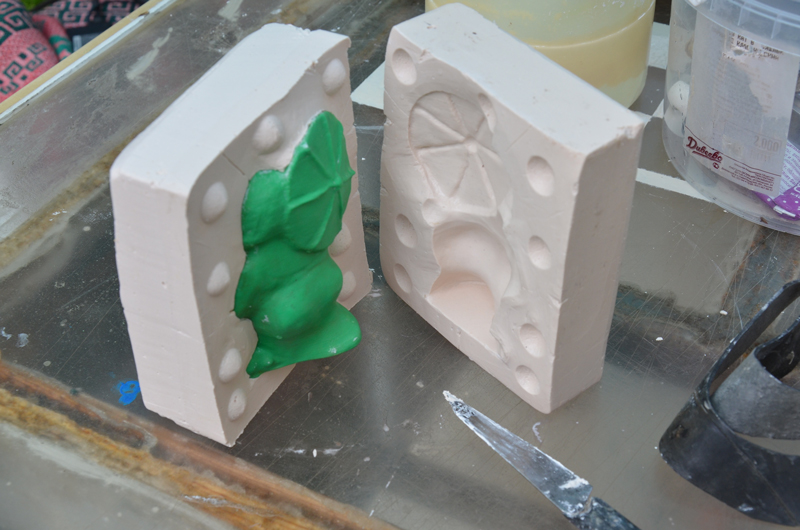 
5. Now we can make more than a dozen figurines by filling liquid clay into the form. 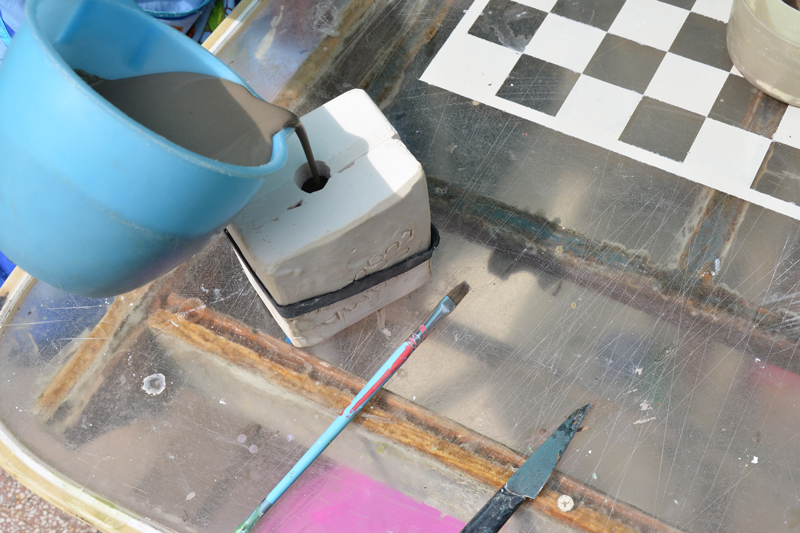 Pouring slip into a plaster mold

The clay figurine is ready!

Model, taken out from plaster

6. After roasting it in a furnace, the master begins painting 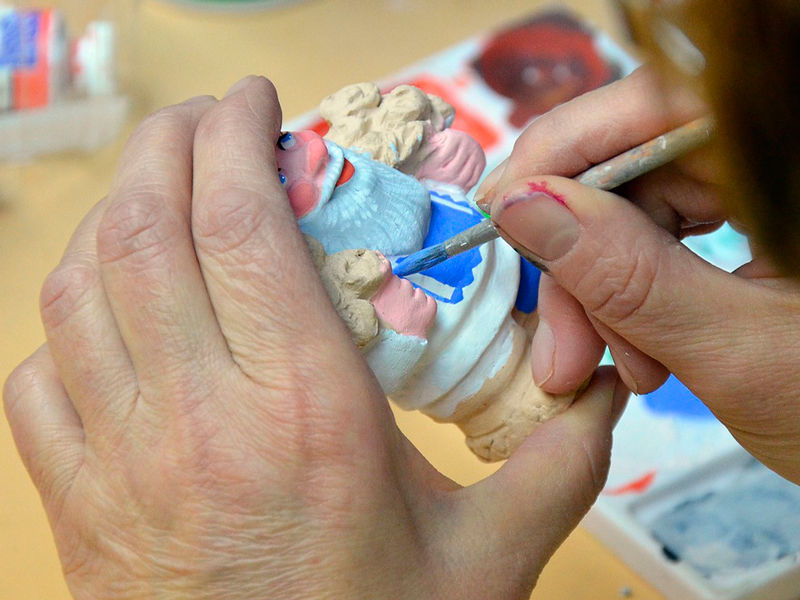 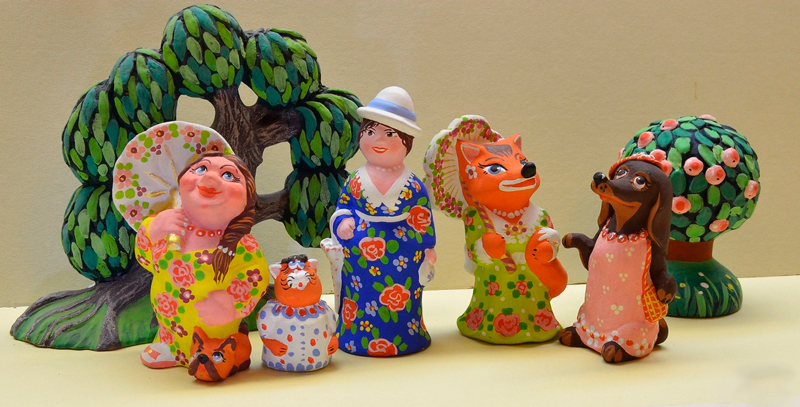 A new and fast method of creating ceramic miniatures in the studio is now possible with the help of RangeVision Smart 3D scanner, 3D printer and software Blender. You can now create not only single figurines but also a series of toys – this is important for the souvenir business. The apprentice children now also have a great chance to learn the modern programs of 3D modeling, animation and printing in practice and in a fascinating form. They have even created the first test cartoon.

Due to the fact that 3D scanner RangeVision Smart allows to obtain colored 3D models, other toys available in the Studio were transferred to the 3D format which gives a lot of opportunities for creativity. Thus, the high quality of detail and colors allowed us to print an exact copy of miniatures with 3D printer at the other end of the Earth - in Lebanon. 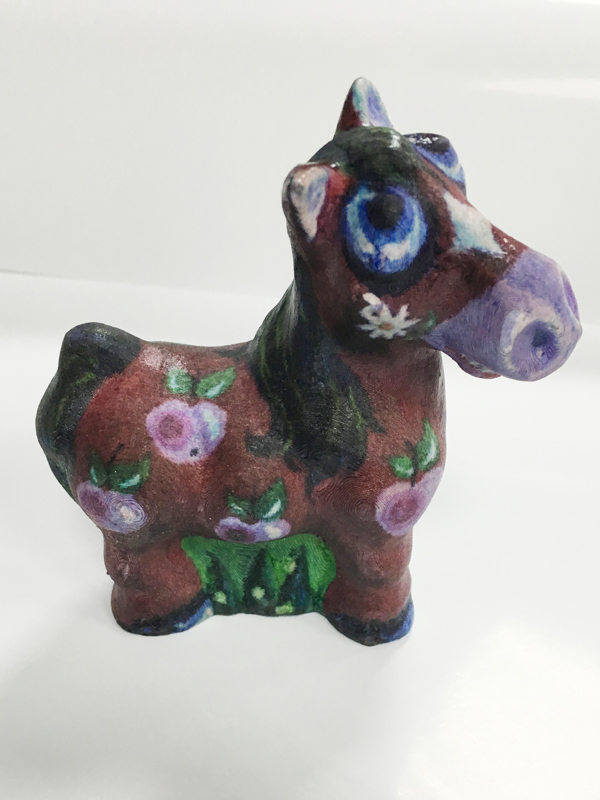 It turns out that 3D printing and 3D scanning take souvenir production to a new level. Now, replication of models has become fast, accurate and technological. You now have less routine and more creativity. Speaking of creativity, the studio has a small theater where the leading characters are the same Rastyapinskie toys, while the main characters are the talented apprentices.

Theatre in the “Young Sculptor” studio

The “Young Sculptor” studio expresses sincere gratitude to the company RangeVision for the tremendous opportunity to engage in creativity in a new high-tech level.

“Without you, we would have remained in the 19th century!”.